Single-plate conveyors with attachments (claws) to move the cart along the assembly line. Multi-strand chains have many uses, from moving palletized goods to carrier boards on assembly lines to transporting long products such as pipes, tubing, rolled products, or wood. Moving 50′ long products onto the saw line is an ideal application for multi-strand chain conveyors. 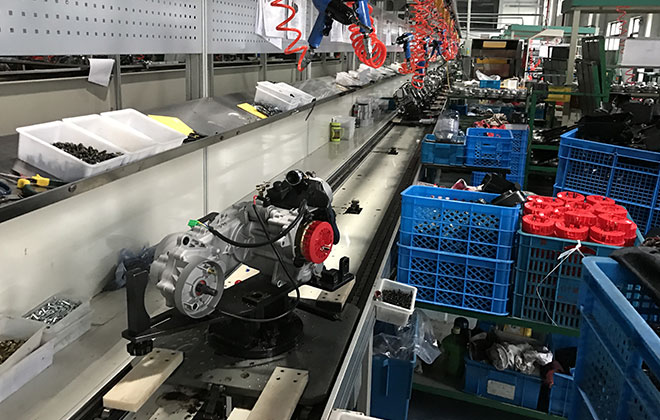 Tricycle automatic assembly line consists of plate chain automatic conveying line, tooling fixture, overhead light, airway, chute, hook, fan, etc. The front end is equipped with a reversing frame line and a suspension conveyor line next to the assignable equipment. This assembly line is the most common assembly line and can also be used for the assembly production of other electric vehicles, such as the assembly of scooters, assembly of electric bicycles.

A motorcycle automatic assembly line is a series of workers and machines, each performing a specific set of tasks on the product to bring it closer to the finished form. Parts are delivered step by step according to the process. This reduces the hassle for workers’ direct manual transfer or product turnaround and can increase production efficiency. The benefit of using this assembly line in motorcycle production is that it allows workers to specialize in specific assemblies, thus improving operational stability and allowing for increased productivity.

The conveyor can assemble electric bikes, scooters, motorcycles, tricycles, human-powered saws, etc. The conveyor moves automatically with adjustable speed and all control components are made of Chinese brand names and foreign brands. It has the following advantages.